I don't quite know how I managed to miss the development of Blood Eagle, from the team that bought us In Her Majesty's Name.  But I have only just found out about it, thanks to some fellow bloggers.  This is particularly odd as it seems perfect for me; being for Dark Age skirmishes with 3 to 15 figures a side.  A few years ago I bought Saga but although, admittedly, I have never played it the inclusion of elements like the battle boards put me off.  It seemed to be too 'gamey' (like the jugged hare my uncle gave me once) for someone as stupid as me, whereas I have played and enjoyed IHMN and the rules are based on the same engine,

Better than that, I actually have a number of Dark Ages figures painted. First up are these old Gripping Beast Romano-British and Saxons.  This was before Little Big Men shield transfers!  I think I have all the Gripping Beast figures based on the Bernard Cornwell Arthurian novels and I bought a job lot long ago from the time they had a shop in Richmond upon Thames. 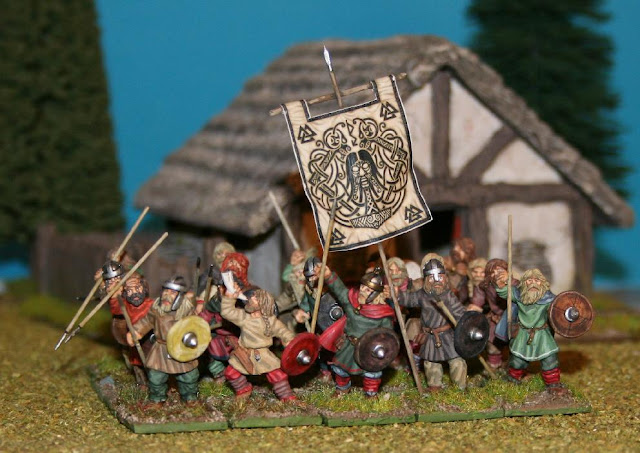 From the same period I have painted around 30 Musketeer Miniatures Early Saxons. I also have a number of Grand Manner Dark Ages buildings, some of which are painted too.

Moving forward in time I am working on some Carolingians and have quite a few more under way for a Lion Rampant force. 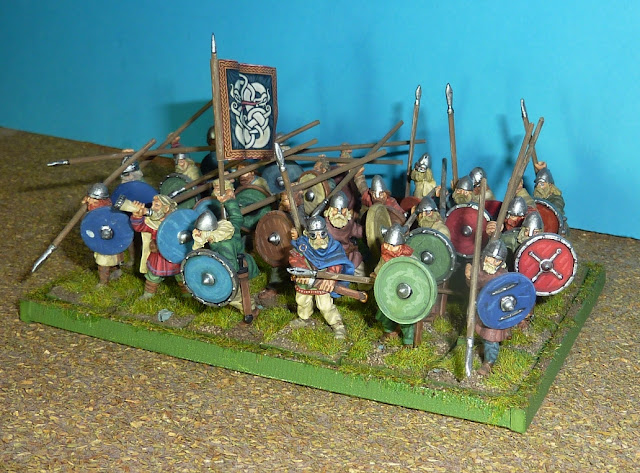 It's Vikings I have the most of, however, and it is really these that I will be looking at for my first Blood Eagle forces.  I must have around 60 painted so I would already have enough to try out the rules.

I've also got Norman, Byzantines and Crusades figures but I think it's probably the earlier period I am going for.

I need to get hold of a copy of the rules and see what sort of forces and, therefore, figures you need. There is an official Blood Eagle blog here.
Posted by legatus hedlius at 1:23 PM

Some lovely figures. I shall look forward to seeing your Blood Eagle adventures!

I too shall look forwards to seeing what you think of the rules when they arrive :)

It's worth noting that there is an extremely active Facebook page for the game with 500+ members that's been going a few months while we were finishing off the rules.

I'm looking forward to this too!

It's not a bad set of rules. I looked for a copy for a while and found a second hand copy at a game show. As skirmish games go t ticks all the boxes I can think of.

legatus hedlius
I live in Surrey, England but spend much of my year travelling around the world which seriously eats into my painting and blogging time!